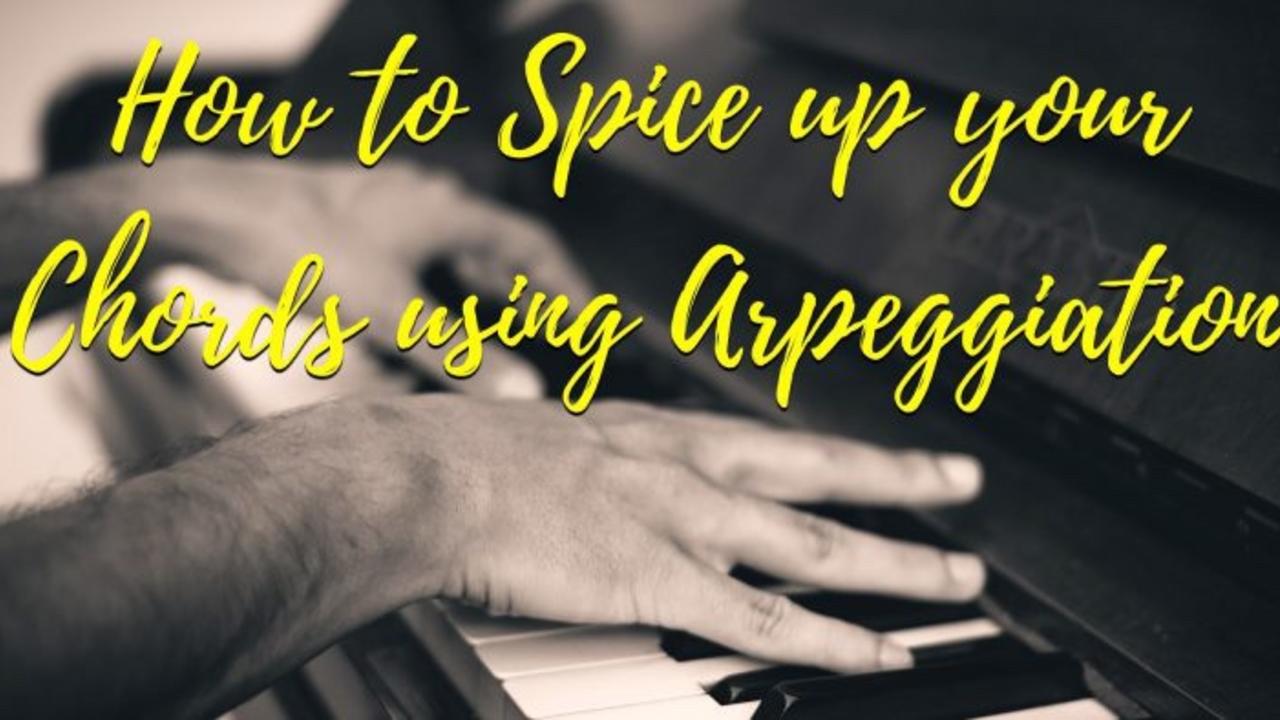 How to Spice Up Your Chords Using Arpeggiation

I’ve taught you all  how the chordal element is one of the 4 foundational building blocks of music.

A triad is the most basic chord you can get, which is the root, the third and the fifth, 1-3-5 when you’re playing on a keyboard.

In production, when you’re arranging and composing music you don’t always want to play the whole chord.  You might want to Arpeggiate the chord.  Arpeggiation means to take that 1, 3 and 5 and break it up.

When you play any of those chords you will hold all the notes in the triad simultaneously.

What is an Inversion?

Arpeggiation is taking that foundation and changing the way you play it but before we get into that the First thing we can do is an Inversion.  Inversions is when you take that 1, 3 and 5 and transpose one or two notes you hold to make up the chord.

Lets take the first chord, Am.  This is how you would normally play it.

When playing the C major we can drop the 5th note down an octave.

You will notice that 2 of the notes in Am are also in C so its an easy transition from Am to play C.

Arpeggiation is taking it one step further and breaking up the 1’s, 3’s and 5’s as you play. So you don’t have to play all three notes at the same time.

One way of doing that is to play the 3 and the 5 simultaneously then play the root shortly afterwards, which is the 1.

Another way is to break up the notes by playing the 1, 3 and 5 in succession immediately after each other and not simultaneously.  This changes the whole feel of the chordal structure.

Its the same three notes in the triad of the chord.

Now we can take it a step further.

There are many possible arpeggiations because if we take the root note of Am for example, its in more than one place.

The same with the 5th and the 3rd so the are so many combinations that you could come up with to create the arpeggiations.

So I could even play the Am like this instead.

There are Many Arpeggiation Combinations

This gives you a lot of power when it comes to producing and arranging music.  This principle applies to all instruments.  If you’re playing a guitar you could strum the whole chord or pick any one of the 3 notes on the 6 strings that make up the chord and play along with the tempo of the song.

You can also choose a string sound and do this on your MIDI keyboard.  I chose a Staccato String Ensemble and if you hear that, it sounds very traditional and familiar.

So I could take a simple chord structure, brake up the notes, move them around, created a pattern out of it, use inversions then create arpeggiations.

Exactly the same chords and arpeggiation patterns played on a synth has a European dance or EDM sound that is so popular today.  This is a very powerful technique to use when composing, producing or arranging instruments because sometimes just playing chords can be boring, you want to create some kind of rhythm and interaction.  This is also an awesome way to create cross-rhythms.

When you look at your DAW, you have thousands of sounds in there and now you look at the major and minor common chord structures you have to choose from and all the different arpeggiation options to choose from, it opens up millions of possibilities. I would love to ask you...

Would You use Arpeggiation in Your Music?

Its something thats fun to do.  You could spend hours and hours trying different sound, different chord structures with different arpeggiations to find beautiful combinations.  Thats pretty much how most music is created today.

Arpeggiation is a Universal Technique

Theres no real difference between what we’re doing here on the computer and what a pianist does sitting behind a piano composing.  There isn’t a huge difference between what we’re doing here and what an arranger does when they compose classical music.  Even classical music has a lot of arpeggiation in it.  When you listen to most classical music you might say, “Wow, this music is so complicated.  It has such complexity and it has so many moving parts ...” but most of the time its just simple chords that are being arpeggiated.  The strings are going up and down, all the instruments are just moving through the roots, the thirds and the fifths in different combinations and different rhythms.  It sounds complicated, it gives it depth and “intelligence” but yet its the same three notes.  Its the same chords being played again and again.

Its the same with a guitarist.  When you’re picking through a chord on different strings all the guitarist is really doing is arpeggiating the chord.  This is a major and fundamental part when it comes to understanding music, production, arrangement and composition.  They all work together.  The trick is to find combinations of different instruments that work together and create a harmonious sound that all comes together.  Thats the goal of a producer, to find a combination of three, four or five sounds (the four fundamentals in music) and get them to sound like one thing.  Thats the ultimate goal of a producer, arranger and composer.  When you’re making music you don’t want the person on the other side to go “Oh, listen to those five instruments.”  You want that person to go “Wow! That sounds amazing.  I love that song!”

Ultimately, these are universal techniques.  Theres no real difference between deep folk music and modern electronic music, they all have arpeggiated chords in them.  Its just a question of what instrument they are using.  Is it electronic? Is it live? Is it programmed?

New moves, motivation, and classes delivered to your inbox.

We hate SPAM. We will never sell your information, for any reason.